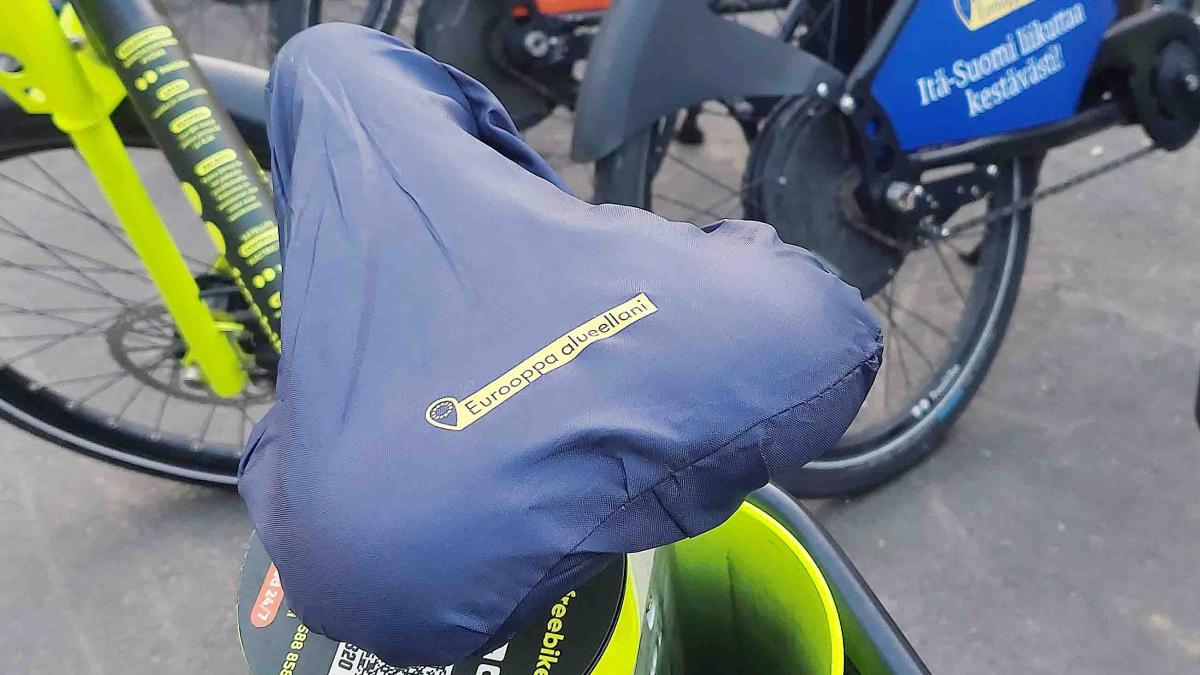 An advertising campaign titled ‘Eastern Finland is moving you sustainably’ has been running in newspapers, social media information flow and on city information screens in Eastern Finland during September. It is part of the communication campaign ‘Europe in my region’, which disseminates information about regional EU projects across Europe. Nearly 40 local campaigns are organised in eight focus countries between 2021 and 2023. In addition to Finland, the campaign also involves Bulgaria, France, Germany, Greece, Italy, Portugal and Romania.

The campaigns highlight ideas and initiatives enabled by the EU that have relevance at local level. In Eastern Finland, sustainable mobility was chosen as the common denominator.

In mid-September, the EU-funded stellar projects in North and South Savo and North Karelia se-lected for the campaign were presented to the public at Riihisaari near the Olavinlinna Castle.

Vilkku bikes is the first fully electric assisted and floating city bike system in the Nordic area. It was launched in Kuopio in May 2019. There are currently 350 shared-use Vilkku bikes and in just over three years, they have clocked up three million kilometres, which is a huge amount.

“EU funding has been occasionally criticised but thanks to Vilkku, it has helped to make quite a few people in Kuopio more mobile,” explains Jari Sihvonen, Communications Spe-cialist in the Regional Council of Pohjois-Savo.

The Nature Saimaa project intends to make the Saimaa region a national destination for sustainable and responsible nature tourism. The aim is to increase the number of tourists in the Saimaa and Savonlinna regions and to encourage visitors to stay longer in the area. The Saimaa region will be developed into the internationally best-known cluster of nature, culture and wellbeing tourism in Finland, with a focus on better customer experience.

Karelian Trails is the North Karelian contribution to the project. The recently opened and well signposted mountain biking and trailrunning trails in Kitee, Tohmajärvi and Rääkkylä are also a new experience for Ilkka Herola, the Nordic combined skier who won the silver medal in the 2021 World Championships.

“One must be thankful for Finnish nature and the almost endless opportunities it offers for recreation. There are excellent and well-maintained jogging trails everywhere. I’m quite familiar with the trails in the Puijo area in Kuopio but the Karelian Trails are something different. Hiking trails have been built here in Eastern Finland with EU support for all tastes,” writes Herola in his social media posting after testing the new paths.